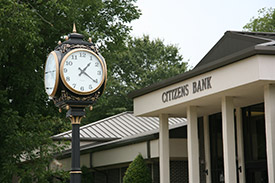 About The Citizens Bank of Winfield

The Citizens Bank of Winfield is located in Winfield, Alabama.  Our primary mission has always been to serve the banking needs of the community and a part of this has been keeping the bank financially strong and safe. With the economy in a weakened condition, it is important for our bank to remain strong and safe to retain the confidence of our customers.

Today, as the bank continues to grow, we strive to provide service and convenience to our customers. The Citizens Bank has an ATM conveniently located near our drive-up window. Our checking and savings accounts, certificates of deposit, IRAs, loans, safe deposit boxes, etc. provide a variety of options to customers and our staff is committed to making our bank your bank.

As the bank grew, its Main Street location had limited space to provide service to customers and very little parking. In 1973, the bank moved into its current location with ample space and increased parking capacity. The bank initially expanded this building in 1983 when the building was increased by one-third. In 1998, another construction phase was completed, adding an additional 4,000 square feet to the current building. This construction over the years has been necessary to accommodate the growth and to provide the very best in convenience and service to our customers and community. With total assets in 1963 at $3 million, the bank has grown to a total of over $200 million in assets today. The Citizens Bank serves a five county area including Marion, Walker, Winston, Lamar and Fayette counties.

With Florence and Huntsville to the North, Birmingham to the East, Tuscaloosa to the South, and Columbus and Tupelo to the West, Winfield is located between several larger towns providing small town living with convenient access to shopping, movies, etc.

Back to the top